The Princess, A Pup and The Kindness of Strangers
Mama Jem
April 18, 2011

We have been given the privilege of parenting two beautiful children. One who was born to us, one who placed with us. They are both miracles in their own right but this writing is about the youngest.


For those new to this blog, The Princess was born with a rare genetic disorder known as Emanuel Syndrome. It causes multiple medical anomalies and developmental disabilities. There are just a little over 200 known cases in the world. Her birthmother was given a grim outlook so she opted to place her for adoption. Our lives have never been the same. 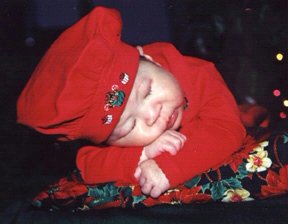 One of most obvious birth defects was a cleft palate. Hers was so large that formula would run out her nose with every feed. It was a challenge but it led to precious bonding for all of us as we worked for hours to make sure she was well nourished. Even after her cleft palate repair, feeding was an ordeal for several different reasons.


Last year we began discussing the benefits of having a dog. We had read the research and even experienced the calming effects of just being around dogs. Last Summer she spent an evening with our friends who raise guide dog puppies. They spent the evening laying next to her as she soaked in the attention. To us, a retired guide dog or career change dog would be perfect but  the waiting list is long.


Just a couple of weeks ago, we found him. Knowing that a full service dog would be overkill and an untrained puppy would be more than we can handle, I looked up a breeder that I had heard wonderful things about. Our dear friends got their Golden Retriever from her a few years ago. Their dog loves our daughter and is even a bit protective over her. Whenever we visit, he wants to be where she is.


A couple of weeks ago I contacted the breeder. I inquired about available dogs as well as upcoming litters. Her response gave me goosebumps. She had a pup who was born with an issue that caused milk to run out of his nose when he drank. She spent hours hand feeding him until he could eat solid food. He is gentle and socialized. She sent a photo which was completely adorable.


Last Saturday, we drove out to meet him. Our friends met us there. We were all pleased as this 10 week old puppy walked up to the wheelchair. He looked up and gently put his paws on the step as they looked at eachother. 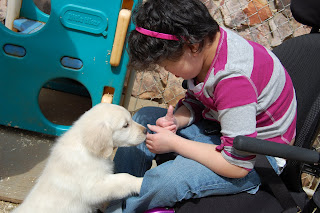 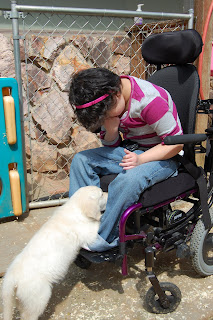 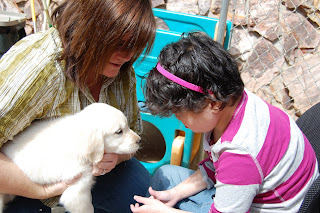 It was a match! He has the traits we were looking for. He is calm, gentle and extremely smart. He is already well socialized and his crate training is underway. The only problem left is although the cost was much less then a full service dog, he was still above what we have at this time. So the breeder started telling their story and so did I. Without asking, people offered. It was on the hearts of several strangers and a few friends to see this pair get together.
Today the call came! The puppy has been paid for and now this part of the journey begins. We are blessed, thankful, overwhelmed and thrilled! We are looking forward to seeing great things happen for our little girl and her new best friend!
Always,
Hope