The Example of Joseph (New Post: The Glorious Table) 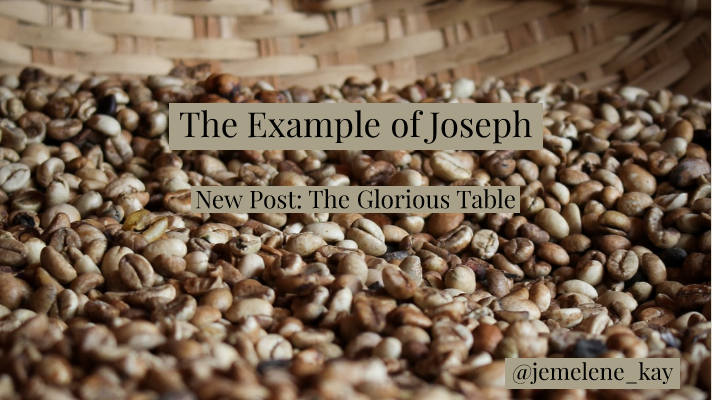 I’m the youngest of five children, as well as the only girl. It’s often assumed that I must have been the favorite in my family, but life was more complicated than that, and it would take volumes to explain how emotional issues arose in a family with two loving, committed parents. I stopped trying to figure it out long ago. But one thing I do know: nothing I’ve experienced has been wasted. Every twist holds a lesson, and every turn is a chance to grow.

Although I could never choose a favorite Bible story, the lessons of Joseph’s life have resonated throughout my life. Joseph was favored by his father, Jacob, and Scripture refers to a coat—or, in some Bible translations, a tunic—Jacob gave him to signify how deeply he was loved. Some scholars think the robe was consistent with a garment worn by royalty, so its significance would not have been lost on Joseph’s brothers. Of course, compounding the jealousy was Joseph telling them about a dream he had which illustrated his elevated position in the family.

When the opportunity came, Joseph’s jealous brothers threw him into a pit. A short time later, they sold him to a tribe of passing Midianites. Then they took his tunic, covered it with goat’s blood, and convinced their father that his beloved son was dead. Jacob, devastated and mourning, could not be comforted…