The Cross Through the Eyes of a Mother
Mama Jem
April 7, 2012

During this Holy Week, I can’t help but reflect on the most precious gift ever given to humankind, the gift of life. This gift is the most priceless as well. It took enormous sacrifice, we as Christ followers know this. We have heard the story for years told in so many ways that we often get immune to the depth and the price that was paid.
Our church body is in the fourth year of presenting the story called “The Passover Lamb”. It is a beautiful portrayal of Jesus during the last days of Holy Week and Passover. A few months ago I was asked to portray Mother Mary and I accepted. During the first rehearsal of the crucifixion scene, the director gave me a picture of how she wanted this part to come across. The horror that Mary saw when she looked upon her son hanging from a cross, beaten, bloody, dying and being mocked by the crowds that surrounded her was to be conveyed.
As I kneel at the foot of the cross during each performance, I see a very small glimpse of what Mary must have seen. It is chilling. My ears tune in to the jeering of the crowd. The voices of the same people who earlier in the week would have been shouting, “Hosanna”, “Blessed is He who comes in the name of the Lord”! After He dies, we are left alone, the only sound you hear is the wailing of His friends. As He is carried away by the guards, another wave of grief sweeps through and the reality of His sacrifice sets into another layer of my soul. Then there is a time of hollow mourning. Where numbness and grief intersect. There is no more energy for wailing, only empty sadness.
Then it happens, as it did in reality, the triumph of life over death. The stone rolls away to reveal a risen Saviour. Our God who came in the flesh to pay for what I could not, emerges from the tomb.
The hope that He brought with Him on that day is my constant companion. It has carried me as I am sure it carried Mary on the dark day so long ago. We know the accounts of what she saw on the day He died, we can imagine the joy when He rose but today represents the in between. Today, on the day in between, the confusion, the suffering, the sadness she walked through on that day. Although she knew what He had taught, she also knew that man has freewill and perhaps it was freewill that murdered her Son.
Today, during the “in between”, as I prepare to celebrate His resurrection, I will contemplate the heart of a mother whose pain was real. A woman who willingly accepted what it meant to serve God with everything. She never once turned from her commitment and continued to trust in her God, even in the middle of the unimaginable. The God who asks us to trust Him with everything we have as well. 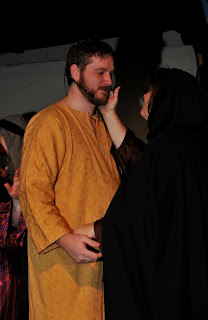 Have a blessed Resurrection Weekend!