What Is Holding You Back? 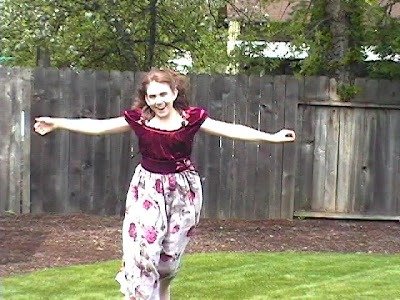 On Sunday, during another wonderful service, there were several people who chose to have prayer for various needs in their lives. While praying the Pastor asked God to release people from their chains or in other words from those things that were keeping them bound up and unable to move forward. This brought on a beautiful time of release and the ability for many to move forward in their lives. No longer would they need to feel held back or frozen in a place of no movement.
This morning, during my own time of prayer and reflection I was struck by something that excited me so much I had to interrupt the Coffee Guy to tell him about it! I really believe this could be one of those life changing moments and I wasn’t going to enter it quietly.
As long as I can remember, I have had a love/hate relationship with food. I love it when I want comfort and hate it when it makes me feel out of control. I am one of those girls that could more easily name the very few diets I have not been on as opposed to naming everything I have tried. Its one of the culprits I have blamed when I didn’t fit in (literally) yet I have come to know it so intimately that there isn’t a dish on this earth that I wouldn’t be willing to try and prepare. Food was my friend when I was lonely, my target when I was angry and still there to celebrate the big events of my life! So of course, food must be to blame for so many of the ills in my life, right?
Recently I have been pondering this relationship and have been frustrated to find the answer so elusive. I mean really, everybody seems to have a angle. From cutting out certain foods to how many times a day you eat to writing down everything you eat. We count calories, fat grams and water intake. I have done all that and more! So why can’t I get a grip?
While studying Acts this morning, in Chapter 15, Paul and Barnabas were confronted with another group of men teaching about the need for circumcision. It struck me that so many of us are doing the same thing! Circumcision is an act of the flesh, part of the law and an act of cutting away the flesh. I had become part of this argument. I found myself a couple of weeks ago convinced that its not about what we do with our flesh but its our hearts that need to be changed. Sure, our actions will follow but until our hearts are changed, its jut an outward act of the law.
As I read further, I came upon the place where Paul and Silas were imprisoned in Acts 16:25-30 they sang hymns. As they sang, an earthquake shook the entire prison, the doors flew open and their chains fell off. This is where it really hit me. They were busy singing and praising the Lord when they found the sweet release of their chains falling off. They weren’t busy examining their chains to see what they were made of or how strong they were. They didn’t sit around discussing how they got on there or the unfairness of their situation. They praised their Lord! They concentrated on praising God while in their chains. They continued to seek intimacy with Him instead of excuses to resist intimacy!
My chains are not food. Food has been covering my chains! When I gave up food for exercise, then it was exercise that covered my chains. When I followed the laws of “diet”, I was shackled to the law. As I shopped for the perfect clothes, car or mate, those things covered my chains. When I set out to be the perfect wife and mother, those things distracted me from my real chains as well. These things have been diverting my focus from the real bondage all along! The real bondage is going to be different for everyone and I’m still seeking God to figure out mine. Most likely I will find some pride, lack of faith or something else that keeps me from truly being intimate with God. Whatever it is, Romans 8:1-15 tells me to walk in the Spirit. Its a lack of trusting Him and turning to whatever I have considered my chains to be that has kept me from the freedom He intends for me to have!
Today is a day that I am celebrating freedom! After seeking Him, asking for wisdom and having prayers of revelation spoken in my behalf, He is revealing to me that it is time to step forward. Moving away from the old and facing a new day! I can almost audibly hear the chains falling off of my mind and heart.
What are you seeking to be free from today? Do you really want to keep carrying those chains around? Isn’t it about time you seek the only one who can make you truly free?