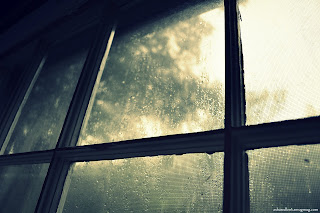 The weight of my down comforter crushed in as it held my tired body in place. The darkness was almost satisfying as it kept me hidden from the day. It was as if the emotional weight of depression had joined forces with my bed to keep me from facing life and somehow I found comfort away from the light.

We had just returned from a draining out of town trip. One that had been meant for refreshment, only revealed to us what we had dreaded for so long. The sights and sounds of traveling were getting to be more than our daughter could handle. Over stimulation came on more quickly and soothing her was taking longer. There were some amazing and beautiful things but the thought that we could be looking at a decline in the condition of our sweet girl just tore through me.

I was tired in every way possible. Unable hold my bible to read, my iPod  “read it” to me. I laid there for days, dragging myself out of bed at the sound of the bus in the afternoon. I would drive the wheelchair in the living room, park it and wait for someone to come get her out so she could get diapered and fed. I sat crumpled on the couch feeling the spiral down. At some point I remember believing that I would never emerge from this ever deepening pit.

It had been years since I had been there. There are things much more obvious that had caused grief but none had put me into such a deep hole.

Adding to the weight was the new season we were in. We found ourselves in ministry again. Church leadership was so alive and vital but I couldn’t shake the depression and I began to hide from everyone.

Our former church had taught us not to reveal depression. This was clearly a sin that was of our own choosing. With a few good verses and self control, you would overcome. There wasn’t anyone to even trust with my sadness. Four years after losing my brother, my niece passed away. Even with obvious reasons for grief I was told that I “just needed to get over it”.

So I found myself in a new place,with new people, a new bout of desperation and old fears. Feeling crushed by the layers of blankets and condemnation I could do nothing but surrender to the only One who mattered. With the smallest bit of strength, I chose to trust again. Little by little I allowed myself the gift of listening with my heart.

It was then that Grace whispered to me.

The Holy Spirit spoke gently into my heart. There in that place where darkness had crept in and heaviness flooded every inch of me, His love penetrated my soul.

Those words from 2nd Corinthians 12:9 were the promises I needed in that moment. “My grace is sufficient for you, for my power is made perfect in weakness.”

My “weakness” that had brought shame and condemnation to my past was now my strength. This grace, this concept tied to a word that we throw about so freely, lit up inside of me. Not having to be strong on my own meant not putting pressure on others either. No longer having to perform was freedom.

In the months since, I have written often about grace. I am still exploring it but even better than that, I am living in it.  I invite to you join me in this journey of being fully awake in God’s love, mercy and grace.


This is my contribution to Awake: A Synchroblog at SheLoves Magazine