In the late ’80s the television drama “ThirtySomething” caught my attention when the storyline dared to tackle ovarian cancer. The day that Nancy had her surgery, every person who came to visit her brought a loaf of banana bread. It was an integral part of the storyline as if no one knew what to do in the crisis so they baked. I don’t know why but that is one of those moments that have stuck with me.

Six years ago I sat in my home, feeling as if my guts had been ripped out and not knowing if I would survive. No one seemed to notice or to be in the culinary mood but just maybe they just didn’t know what to do.

We had been pursuing adoption again for four years. We fostered a sibling group for six months in order to show the committees that we had the ability to adjust our family to the various needs of children in the system. Our beautiful girls were placed in a home on the opposite coast. It was painful to watch and question the choices of those who made the decision. Nine years later I can say they made some very big mistakes. It was nothing compared to  what came next.

After receiving a call from our adoption counselor and a visit from a social worker, we were convinced that we could provide two boys in need a permanent home.  We made arrangements, brought them home and fell madly in love with them both. At the time we were told that they were 99.9% sure they would be with us permanently. Looking back I should have bought a lottery ticket because apparently we fell into that very tiny percentage.

I had two sons for six months. They called me mama. They lived in my home, took up a substantial part of our hearts and for those very short months, filled our lives with energy that couldn’t be contained.

The day they left we took them to the respite provider as requested by their social worker, the oldest one called to me from the back of the Suburban. The conversation went like this:
“Mama?”
“What buddy?”
“You aren’t coming back to get us are you?”

I didn’t turn around. Not wanting to reveal my tear soaked face, I just kept looking forward. Glancing at my husband, I stifled sobs almost choking on them as they threatened to burst out of my throat. We got out, I held it together the best that I could and hugged both of my sons goodbye.

To this day I don’t remember anything about the drive home except flood of tears that burst through the weakened dam. Most of all I remember feeling very alone and uncared for outside my own family.

The comments that followed were by far more unhelpful than they were healing. “It was for the best, you had enough on your plate already.”
The one the branded my heart like a searing iron, “Why did you do that? It’s like taking puppies back to the pound!”

Thankfully, my dear friend and mentor said, “You just need to let yourself be sad.” So I did.

A couple of weeks later, some friends came to visit, they wanted to go visit the agency that had helped them adopt twenty years before so we took a trip north. As we drove up, in large letters above the door was written,

“Every Child Deserves a Home”

I waited in the car, weeping, crying out and questioning “I gave them a home and a family and my heart! Dear God, what happened?” He was silent in the hollow moment. I only heard the sound of grief crashing into my heart with its devastating wind.

No one brought a casserole. At the very least I was sure I had rated a banana bread. For the next several months, at random moments, someone would see me at the store or church and ask “Do you have a babysitter today? Where are all of your kids?”. It was as if no one knew and those who did, didn’t know what to say.

There is no protocol for losing your children to disrupted broken adoption. There is no grave to visit, no memorial service and no flowers. Just photos. Most of which you can’t share because of privacy rules. Very few friends could say they have been there. Those who did, touched me in unimaginable ways. 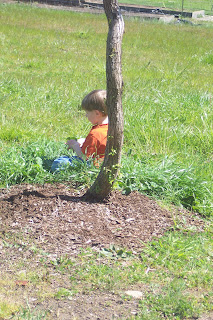 In the years since, I am not only finding peace, I have found joy in God’s plan. “My” boys have a permanent home and from all reports, it is a beautiful, loving home and they are thriving. Learning to reach out to the forgotten grievers has become a mission of sorts for me. Knowing that God was there through the pain, in the silence and among the tears has strengthened my faith. It has brought me to a place of intimacy with my Savior that I had asked for but perhaps didn’t truly believe I would ever have.
I doesn’t mean I don’t miss them. I always will. Even today, as the tears rolled freely down my cheeks, their beautiful faces are on my mind.